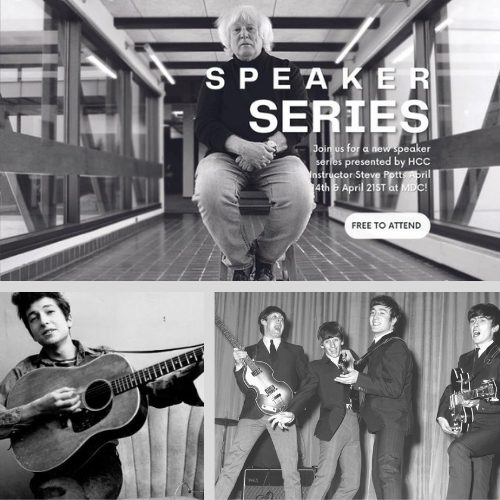 Join us for a complimentary evening presentation and fantastic food at the Minnesota Discovery Center on April 14th from 6:00pm-8:30pm. The Minnesota Discovery Center will be hosting Hibbing Community College Instructor Steve Potts and special guest Joseph Donnelly, author of an upcoming new book on Bob Dylan and John Lennon. Together, Steve and Joe will present on a multitude of fascinating topics as it relates to Bob Dylan and the Beatles and Bob Dylan and John Lennon.

Starting at 6:00pm, The Rustic Pig’s new Executive Chef will serve delicious chef inspired appetizers prior to the speaker series presentation. This event is free and open to the public. Appetizers free while supplies last.

A life-long admirer, Joe Donnelly has studied Bob Dylan and the Beatles – especially John Lennon – for many years. He is interested how they influenced each other and helped drive each other to greatness and phenomenal cultural impact.

A writer and a photographer, Joe has held several one-person photo exhibits, including his “Shot in the Dark” exhibit at the Weinstein Gallery in Minneapolis of images taken in near total darkness. He has also exhibited work paying homage to and emulating the work of Pictorialist masters of the early 20th century.

Born and raised in the New York metropolitan area, Joe studied Biology and English in Vermont followed by graduate school at the University of Iowa. He worked in Health Care group laboratories at 3M for many years.  He resides with his wife Becky Thorson in Minneapolis.