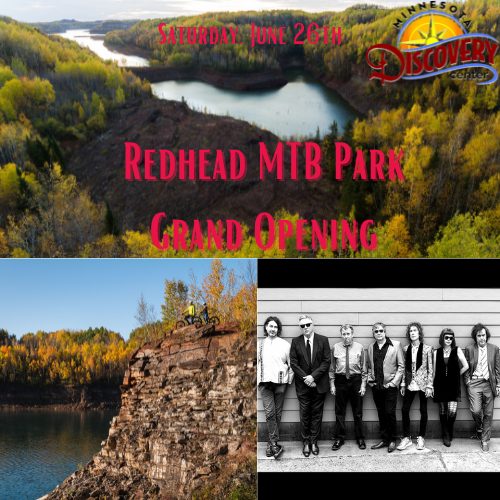 (CHISHOLM, MN) The Minnesota Discovery Center (MDC), located at 1005 Discovery Drive in Chisholm, announced that they will celebrate the official grand opening of the new world class Redhead Mountain Bike Park with a ribbon cutting, press conference, and day of happenings at the trailhead on Saturday, June 26th starting at 10am.

Jordan Metsa, fund development and marketing coordinator at the MDC and Redhead stated, “We are excited to invite the public behind the fences of the mines that built America, to explore their hidden canyons and ethereal blue waters in a way they have never imagined. Redhead is a must see for every Minnesotan.”

Redhead Mountain Bike Park made its initial debut in 2020 with a soft opening of 15 miles of trails. This year, there are an additional 10 miles of trails (The Rim, The Zen, and Tough Mama trails new in 2021) bringing the total mileage to 25 miles. This marks the completion of the phase 1 build out of Redhead. To mark the milestone, the Minnesota Discovery Center, City of Chisholm, Chisholm Chamber of Commerce, and Iron Range Off-Road Cyclists are hosting a day-long event at the trailhead from 10am-6pm with a concert in the MDC outdoor amphitheater at 7pm featuring The Suburbs. Tickets are available online at etix.com or suemclean.com, charge by phone at 800.514.3849, or available for purchase at the MDC.

The official ribbon cutting ceremony will take place at 10:00am on Saturday, June 26th at the main trailhead at the MDC. Immediately following the ribbon cutting, there will be a press conference in Taconite Square. Following the press conference, press will be invited inside the MDC movie theater to watch the unreleased short documentary RECLAIMED. MDC and Redhead MTB Park tours will take place after the documentary screening.

Celebratory events will also take place on Friday, June 25th and Saturday, June 26th in downtown Chisholm and on Sunday, June 27th Redhead fans are invited to ‘Ride the Range’ at Giants Ridge for a day of music, food, and happenings. Show up at Giants Ridge wearing Redhead merch or gear and receive $10 off your mtb park lift ticket (see attached Redhead grand opening flyer for additional details).

Allowable uses at Redhead include biking, hiking (on designated trails), and Ebikes. Dogs are allowed but must be on a 6ft or less leash at all times and cleaned up after. Water recreation is coming to Redhead in 2021 and will include a docking system. swimming, kayaking, canoeing, and paddle boarding. Rentals will be available at MDC.

Founded in 1977, the Suburbs are recognized worldwide as among the original heroes of the “Minneapolis Sound”, a historic music era. Led now by original keyboardist and singer Chan Poling, original drummer Hugo Klaers, and longtime saxophonists Max Ray (also of The Wallets), they are augmented by a supergroup of newcomers: Stevie Brantseg and Jeremy Ylvisaker on guitars, Steve Price on bass, Janey Winterbauer on backup vocals, Rochelle Becker on Bari Sax and Stephen Kung on horns and keys. The Suburbs continue to entertain at the highest level and remain one of the most creative and vital bands out there today, honoring their past and blazing into the future, with their newest single “Summertime” recently released on May 28!

Chisholm, Minnesota is barely a dot on the map. But this small town on the Mesabi Iron Range of Minnesota once provided the ore to build the tanks and planes of World War II and skyscrapers of New York. Chisholm helped build America and the people of the town prospered. But as time went on, the demand for Chisholm’s ore declined. Although mining continues to thrive in this region, the people of Chisholm are looking to reclaim this abandoned landscape of the past. Now, the community and the industry that built this town are banding together to revitalize a forgotten piece of America. Can Chisholm make the leap from mining town to outdoor capital?