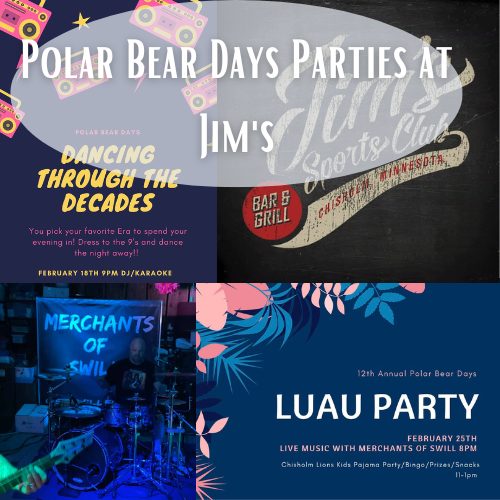 Save the dates for some upcoming Polar Bear Days parties at Jim’s Sports Club Bar & Grill this February! Nothing beats the winter blues quite like music, costume parties & dancing; this February you can catch two themed parties right in downtown Chisholm with their Dancing Through the Decades costume party on February 18th & their 12th Annual Luau Party on February 25th! Why wait for spring to get here when we can have a party now?

The first of Polar Bear Days parties at Jim’s is Dancing Through the Decades which will be on February 18th at 9PM. Dress to the 9’s in your favorite historical era (whether or not that is strictly 20th Century is up to your interpretation & imagination) and party with flap dancers, hippies, 80’s metal rock bands, and mobsters in a time-warp winter wrap-up celebration of the times party that is sure to be an amazing time!

The 12th Annual Luau Party at Jim’s will take place on February 25th and marks the end of Polar Bear Days. There will be LIVE music from Merchants of Swill starting at 8PM and lots of tropical themed fun to be had throughout the evening, so make sure to break out your grass skirts!

Precluding the Luau will be the Chisholm Lions Kids Pajama Party with games, bingo & snacks so the kids can have a party this February too!

Check out more of our upcoming events at our Chisholm Chamber website!