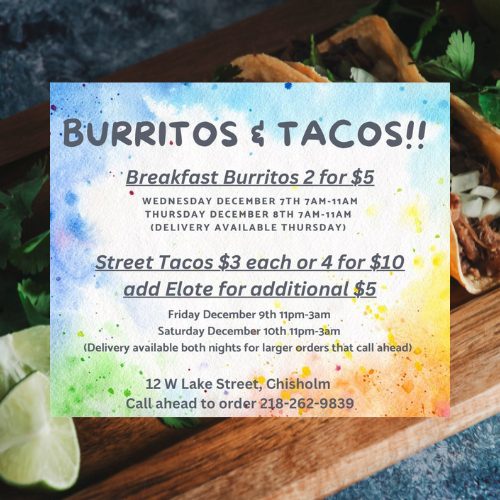 Breakfast Burritos & Tacos at VEMA on Lake Street Thursday December 8th from 7AM-11AM with delivery available! Get your breakfast early and in town at VEMA (Voices for Ethnic and Multicultural Awareness) 12 W Lake Street in Chisholm.

Looking for a late night snack? VEMA is available to help you out December 9th & 10th.

VEMA was founded in the spring of 2020 following the murder of George Floyd in Minneapolis, Minnesota. Seraphia Gravelle (Aguallo), Elizabeth Robinson (Allen), and Nathaniel Coward began the work of educating the community and providing a voice for people of color throughout the region. Historically there has been a lack of representation as well as complaints and concerns falling on the deaf ears of the leaders of the regional community. VEMA stands united to work against racism and injustice. Through educating not only the members of VEMA but also the community surrounding them, they intend on chipping away at the systemic and blatant racism that exists throughout their community. In addition to education, a priority of VEMA is to ensure accurate and adequate representation as the community as a whole works to disrupt racism and discrimination.

Read more about VEMA, their upcoming events, and their mission on their website!